Nelly Furtado’s long-time manager Chris Smith uses the word “fresh” a lot to describe the singer’s fourth English–language studio album, The Spirit Indestructible.  In fact, at the start of the song “Big Hoops (The Bigger The Better),” her A&R guy from Interscope, Thom Panunzio, can be heard saying: “You’re 100 percent right Chris.”

“I remember the first time hearing the record, I freaked out,” Smith tells Lowdown. “She time-released her fresh. That’s what’s on the record. She’s laughing. You time-released your fresh! How the hell did you get fresher? How the hell are you fresher 10 years later? It was real. My reaction was — ‘Damn!’  That’s really the basis of the whole campaign is getting that fresh back out there.”

The Spirit Indestructible — which was released Sept. 18 after being pushed back from June 19 to give the label more roll-out time and allow Furtado to do promo around the world all summer  — mixes club bangers with more sensitive and sophisticated material. The standard version of the album features 12 songs and the deluxe has 18.

“To have a successful launch when you’ve been out of the market for five years, you really need to go there — and that’s what we did,” explains Smith. “I don’t want to rush my shit out. She’s way too important. We need set up and we need to treat her like the global priority that she is.”

The album was made with main collaborator Rodney Jerkins, plus producers such as Bob Rock, John Shanks, Darkchild, The Demolition Crew, Salaam Remi, and includes the chunky mechanical club grooves of “Big Hoops (Bigger The Better)” and “Parking Lot,” the first official North American single; the empowering lead/title track; the pursuit of fame sing-along “High Life;” sweet shaker-pop of “Bucket List;” and ethereal Middle Eastern-tinged ballad “Miracles.” In Europe, the standout mix-it-up ballad-to-dance track “Waiting For The Night” is the new single.

The Miami-based, Victoria, BC-born Furtado, now 33, has sold more than 16 million albums, according Interscope, since debuting in 2000 with Whoa, Nelly! and following it up with 2003’s Folklore, 2006’s Loose, and 2009’s Spanish-language Mi Plan. But Furtado doesn’t concern herself too much with sales numbers these days.

In Canada, The Spirit Indestructible sold 2,700 copies in its first week and 4,500 units to date; in the U.S., 6000 the first week and 9000 to date, according to Nielsen Soundscan. But Smith believes the album is seven singles deep, “easily” — “the last album, we went in five,” he says. Next year, Furtado will be in full touring mode “non stop” (booked by Creative Artists Agency worldwide, except S. L. Feldman & Associates which handles Canada) which will push the numbers up, slow and steady.

“It’s okay if the album doesn’t connect for some reason — as much as I love it — with marketing or promotion, man, anything can happen,” Furtado tells Lowdown. “There’s a lot of really great albums that don’t really sell that much. But I feel like I know how to deal with that, you know what I mean, and I know how to move on. You just make another album [laughs]. You just find your audience.

“Like on Folklore, I remember it really took off in Germany. I think it ended up selling like a million records in Germany alone so going there and going to Europe and playing shows; it’s great being an international artist. There’s always an enthusiastic audience to play for somewhere.”

The first release from The Spirit Indestructible, “Big Hoops (The Bigger The Better),” back in April, was never intended as a radio single, says Smith, but in Canada alone, it has sold 57,000 downloads, according to Nielsen Soundscan, and peaked at No. 18 at CHR and No. 31 at AC radio.

“Nelly and I wanted ‘Hoops’ to be this big club banger. The record company thought, ‘Well, let’s service it to radio.’ My goal was ‘If I get a top 20 hit, perfect,’ and we achieved that pretty much everywhere — with the exception they didn’t jam as hard in the Americas because we moved the album [release date], so there’s no need to get this thing that supposed to be this club banger intro track and force it up the chart.

“So once we moved things, everyone got that breathing room to make it what it is, a re-introduction. It got exactly what we wanted it to. It got the clubs excited about her and radio did play it, and it did all the decent charting everywhere, and now we’ve put the hammer down for this main single, ‘Parking Lot,’ and go at it.” 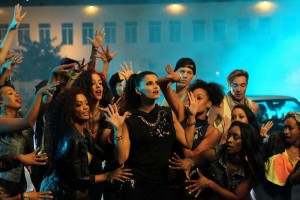 While she did interviews and spot dates all summer internationally, once The Spirit Indestructible came out, Furtado appeared in America on Live! With Kelly!, Late Night With Jimmy Fallon, and The Wendy Williams Show. She also filmed an episode of TV series 90210, set to air Nov. 5, in which she performed “Parking Lot.” Just 10 days ago, she performed at the Dalai Lama’s Commond Ground For Peace in Syracuse, NY.

“She’s doing a lot of hand to hand combat out there,” says Dyana Kass, senior director of marketing, Interscope. “We’re definitely keeping her moving a lot this side of the year with events and different promo stops.”

There’s also some cool marketing initiatives such as an online contest, for which people submit their stories, videos, art, and poems about what represents their spirit indestructible in order to win a meet ‘n’ greet with Furtado. “She’s curating the contest,” says Kass.

Smith calls The Spirit Indestructible Furtado’s best album to date.  “I want it to be repeated that we’d rather die fresh than live cheesy. I really mean that. It’s a big decision for us to go, ‘You know what, this is great; it’s cool; it’s fresh, versus what you hear on radio.’ It takes a lot of balls to make a stance.”

“Yeah, it is a good line,” Furtado agrees when told of Smith’s comments.  “I love Chris. It’s been a good partnership because Chris, he’s extremely business-minded and I’m extremely whimsical. I guess, along the way, I’ve just made so many detours, and I thank my label for supporting my musical detours and straightaways. I don’t know what I’m going to do next. If I sat down today and had to make a five-year plan with the record company, I wouldn’t be able to. I don’t know what I’m gonna feel in two years, three years. It’s nice to have people around you that support that spontaneity and support that irregular pattern. But the fresh thing, yeah; its very organic.

“Quickly — a little anecdote,” she begins. “I was in LA and Rodney [Jerkins] and I got introduced to each other. We were in the studio and I think we wrote ‘Spirit Indestructible’ on the first day. It was so crazy because I’d just met him and I hardly knew anything about him, but we had just created something so intimate together. I left the studio that day and I was like, ‘Should I call you or should you call me?’” she laughs.

“It was like a musical one night stand. It was exciting and very powerful. We worked steadily that whole week and Chris and my A&R, Thom Panunzio, were asking, ‘How’s it going?’ I knew I was so excited about it, but wanted to almost bluff them and be like, [casually] ‘Oh it’s good. Come by on Friday night and check it out.’ I really played them [laughs].

“What I try to do is — I guess like a marathon runner, right — I see my career as more like a marathon than like a sprint. I feel like marathon runners, they slowly release a burst of energy, but they pace themselves through the whole race. I really admire people who sing well into their 80s or 70s like [the late] Cesária Évora. I have to pace myself and, I think, I have to trust my gut and, you know, time release the fresh [laughs]. Or I’ll burn out too quickly.”