Lindi Ortega Is A Cowgirl With A Vision 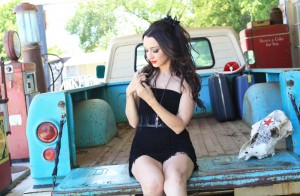 It’s easy to market alt-country gal Lindi Ortega. From the shotgun and old gas station featured in promo photo and “murderous” teaser video for her new album, Cigarettes & Truckstops, due Oct. 2, on Last Gang, to those now-signature red cowboy boots that graced the cover of 2011’s Little Red Boots — and her feet for dozens of live shows — the Toronto native, now based in Nashville, knows who she is and exactly how she wants to portray herself.

“With Lindi, in addition to being a great artist, she’s an incredible co-worker,” Last Gang Records’ U.S. label manager Holly Adams tells Lowdown.   “She’s an equal part of the team at Last Gang, in terms of being creative co-director on photos and videos etcetera. She definitely has a team around her to execute [those things], but she has a real point of view and came to us with her plans for how we will execute and who we’ll work with.”

At the core of the team is Last Gang, of course, the Toronto-based company — founded by lawyer Chris Taylor — which operates as her label, publisher and management; Ole publishing, which signed on as a co-publisher; to her booking agents around the world: The Agency Group’s Jack Ross for Canada and Josh Dick for the U.S., and Arts And Industry’s Mick Griffiths for Europe.  That doesn’t include the radio and publicity firms Last Gang retains, Sacks & Co in America and Indoor Recess in Canada for media relations; and Charterhouse Music Group’s Biff Kennedy and Tazmoe Music’s pairing for U.S. radio.

“It’s great to have a team of people who really get what I’m doing and they’re not prescribing things to me; they’re not telling me how to be,” Ortega tells Lowdown.  “They’re seeing the same vision that I have and seeing where I want to go with it. I feel like it’s a family. I felt like that ever since working with Chris and Last Gang; it’s just a family that’s expanded to Ole publishing. Everybody’s onboard with the kind of music that I want to do, which is wonderful. It’s really an honour to have all these people involved and helping the music out there.”

Ole has landed prominent placements for Ortega’s music on the TV show Heartland for “Fall Down or Fly” and the CW show Hart of Dixie with “Little Lie.”  She also has an upcoming performance placement in the film Move On, which she just filmed in Berlin and performed “Every Mile of the Ride.”  But Julie Moe, media manager, at Ole in Nashville, is involved with far more than pitching songs and setting up co-writes. She shot the photos and teaser video for “Murder of Crow” and helped on the full video of “The Day You Die” — something most major publishing companies don’t involve themselves in.  “I’m calling it full-service publishing,” she tells Lowdown.

Even with the album set to come out, Ortega is still writing. The singer posted on a recent Facebook status about a writing session with John Paul White of the Civil Wars: “I’m happy to report he is the coolest, most down to earth human being… and his voice is amazing!”

“She’s a phenomenal writer and with the right placement, she’ll be more than just an artist, more than just a singer-songwriter. She will be a great songwriter,” says Moe. “It’s always great to diversify. No one ever did badly because they got a No.1 record with someone else. I think we’re going to start working on her next record too.”

Meanwhile, Cigarettes & Truckstops will be distributed by Universal Music in Canada; red (part of Sony Music) in the U.S.; PIAS in Europe and Shock in Australia — all via Last Gang. “We might go a little softer in the UK at first, but it’s going to be available worldwide on Oct. 2,” says Last Gang’s Chris Taylor.

Ortega, whose country blend is cool, dark and playful, first earned attention from the Drifter EP, released on iTunes in 2008 and then widespread in 2009 on Interscope Cherrytree. But the full-length never did end up coming out on that label. While she suffered through the delays and legalities involved in getting out of the deal, she hit the road singing back-up for the Killers’ Brandon Flowers for eight months. By the time she returned, Last Gang, which was managing her anyway, was ready to put out Little Red Boots on its label division, a version more outlaw-rootsy country than Interscope had expected, but a more comfortable sound for Ortega.

“The last album was about building the foundation and it did well,” says Taylor. “It wasn’t a record that we took a lot of time with the way we have with this one, where it was really planned out. But it set the foundation for where we are now. We’re getting close to 10,000 sold in America, 4000 sold in Canada and probably another 10,000 in Europe, which is a good start.

“We had a bit more time for this record so the quality of songs and the quality of recording is that much better, along with artwork and photos, and everything else that’s going along with this campaign is stepped up a notch from where we were on the last record. That was our rebound album. We were out of Interscope and we were allowed to put music out into the world and we decided to do it right away — get the studio, record the songs, mix them, put them out.”

Cigarettes & Truckstops, which was produced in her Ortega’s new home base of Nashville, TN, by Canadian Colin Linden (Bruce Cockburn, Colin James, Stephen Fearing), has more of a blues influence than Little Red Boots. When Ortega was contemplating various producers to work with this time around, Taylor suggested Linden and she YouTubed him.

“One of the first things I saw was footage of him playing this awesome Dobro solo,” Ortega tells Lowdown. “I immediately felt that the sound of that instrument would be really good for my record and that I needed to have it all over my record, then the more I learnt about Colin, the more I found out he was a blues guy.

“I had just finished reading the Hank Williams biography [Lovesick Blues by Paul Hemphil] and I learnt that Hank was influenced by a blues guy named Tee-Tot. That’s where I learned that a lot of early country was stemming from old-school blues. So it started creeping in a little bit in the music that I was doing. And I thought it would be really cool to have Colin’s blues background as a sprinkling on the kind of country that I was doing. That’s why I chose him to work with.”

Americana radio will be serviced the whole record and can pick which of the 10 songs they will play, while the “The Day You Die” will be worked at triple-A, followed by the lead and title track, “Cigarettes & Truckstops.” “I don’t think there’s a radio format in Canada [for her music],” says Taylor. There will be multiple songs and multiple visuals put in the market.

“Lindi worked very hard to build a foundation for herself [in the U.S.] with the last record and we made some really substantial inroads related to NPR [National Public Radio] really supporting her and calling her out as Canada’s answer to Dolly Parton,” Last Gang’s Adams says. “While we so appreciate the comparison, we feel she’s got multiple genres of music that she crosses and we feel that’s been made evident in the touring that she has done and the touring that she’s doing now.”

The genre crossover allows Ortega to open for rock, country or even punk acts. In what even Taylor felt was an unusual pairing at first, she toured with hard rockabilly punk act Social Distortion earlier this year after Taylor gave their manager Shane Trulin her last album simply because he thought he might like it and it’s rockabilly tinges. He did and played it for the band’s frontman Mike Ness. She has since been asked to go back out with them Oct. 11 to Nov. 16 in America with two shows in Canada.

On the other side of the spectrum, Ortega is currently on tour with country-pop crooner k.d. lang for 13 dates, from Sept. 9 to 29.

“With k. d. lang, we’ll see how that tour goes,” says Taylor.  “She does well with a mature audience. Social Distortion’s audience, there are some 20 year olds, but it’s a lot of 30s and early 40s, people who have grown up with the band, and k. d., I’m suspecting will be in that age range if not, a little bit older.”

Last Gang’s Adams is using this ability of Ortega to work in country to rock to punk areas into the overall marketing and promotion of Cigarettes & Truckstops.

“We’re doing things that are appealing to the audience outside of the venues [she’s playing] and trying to saturate that overall lifestyle that relates to other partners, like press that we’re going after,” she says, “Then, on a mainstream level, we feel like in the Americana world and in the triple-A world, with the breaking of Civil Wars and with Mumford and Sons, people are looking for something that crosses genres and is format breaking.”

Ortega, while approving all these initiatives, is just looking forward to increasing her fan base.

“I’m happy to continue to tour and bring music to different places and perhaps to places I haven’t been yet, to people who don’t otherwise know my music or would never be able to discover it if I didn’t bring I out there to them which would be cool.

“It would be great to maybe forge some new collaborative efforts and meet some new people through this record and just continue on. I’m really happy the where things are going. I’m not sure how people gage success, but, for me, I just hope that people understand and appreciate where I’ve gone direction-wise with this record. I don’t think it’s too much of a departure. I think if you like Little Red Boots, you’ll like this record too. I’m just hoping that I’m right [laughs].”