Billy Talent Left To Own Devices On New Album 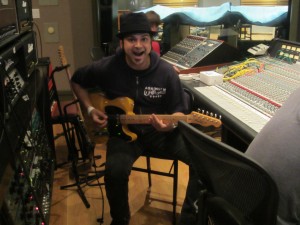 As Billy Talent guitarist Ian D’Sa puts it, Warner Music Canada knew the next album wouldn’t turn into some country album if the label left the multi-platinum-selling rock band to its own devices and allowed him to produce their fourth studio full-length.

“It was decided that the time had come that Ian should be the producer on this record. Between the guys, they know what Billy Talent should sound like,” Warner Music Canada president Steve Kane tells Lowdown. “We gave them the freedom to really think about what works for Billy Talent and gave them the freedom to experiment. So that’s what they did. The results, once people hear it, will speak for themselves.”

Dead Silence will be released worldwide on or around Sept. 11 via Warner Music, except for the U.S. where the Toronto-based band has a brand new deal with Canadian indie label Last Gang, distributed by Sony Music in America.

The only song to have been released so far from the album is “Viking Death March,” which went to radio in late June. The video, released mid-July, was shot in Germany at Rock Am Ring festival in front of more than 115,000 people by award-winning directors Michael Maxxis and David Logan.

“Although not intended to be a radio ‘single’ per se, we knew that once the track became available for sale that stations would start playing it,” Warner Music Canada’s VP of radio promotion, Steve Coady, tells Lowdown. “Lo and behold, here we are with a legitimate top 10 hit at Canadian rock radio. It has been among the most added and fastest moving singles since its release.”

Kane says they wanted to give their Germany company a track that would build anticipation for the new album, even though it wouldn’t be released for another two months.

“Obviously in the world of 2012, we’re not silly enough to think that we can just keep that in Germany and the band were adamant that it’s got to be made available for their fans around the world,” Kane explains. “First of all, you can’t just keep it one country and, secondly, you don’t want to penalize anybody [radio]. So that’s when we decided to inform the modern rock stations here that this track is gonna to be out there; it’s gonna be worked as a single in Germany; it’s not our first official single, but, obviously, we know they’re going to want to play it.” 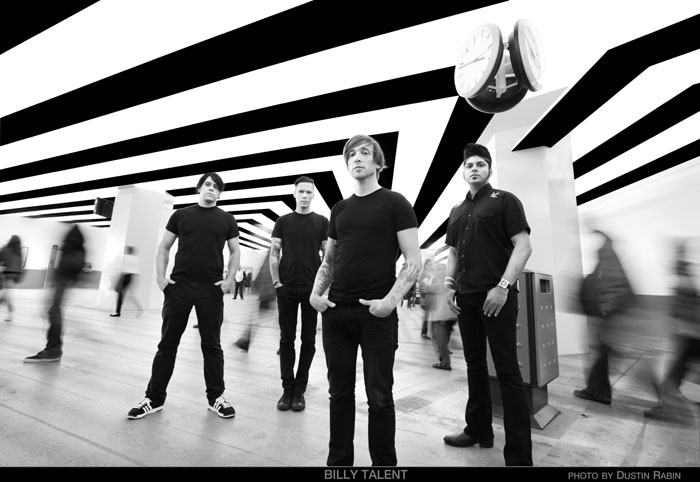 Billy Talent’s manager Pierre Tremblay of Vancouver’s Hive Management says the month of festival dates in Europe that the band played launched the international campaign for the new album, which did not have a title at that point. The single came out the week before Nürburg’s Rock Am Ring and Nuremburg’s Rock Am Park.

“Because we took so long getting this record recorded, we wanted to reward the fans somehow with a song and ‘Viking Death March,’ the theme of it is more of a do-it-yourself, non-commercial, empowerment type thing and that’s what we wanted to do with the song first. We wanted to deliver directly from artist to fan and we succeeded with that, then it took a life of its own and became a successful radio single and the labels decided to work it,” says Tremblay.

The album was originally expected to come out in late spring, if everything went according to plan — but it didn’t.

Frontman Ben Kowalewicz, drummer Aaron Solowoniuk, bassist Jon Gallant and D’Sa began recording the 14-track album in late November, starting with three weeks of drums at Vancouver’s Armoury Studios. They then returned home for Christmas and picked up again in Toronto, finishing it off at Noble Street Studios and Billy Talent Headquarters.

“I have a lot of guitars and a lot of gear here, and it would really be quite expensive to ship it all out there,” explains D’Sa to Lowdown of why they didn’t continue at the Armoury.

The album, from D’Sa’s perspective, is a little bit more upbeat and energetic compared to the last album. “The songs on it are a little bit faster than the last record and goes back to our first or second record. It’s kind of an upbeat record. It’s still got the angst and aggression of the first two, but it’s not as dark as the last one.”

D’Sa, whose angular guitar work has become as much a signature of Billy Talent as Kowalewicz’ intense voice, produced a four-track cassette of the band when it was called Pezz 19 years ago ago in Streetsville, Ont.  He was always interested in producing a proper album for the band later, once he gained more experience and know-how.

“At that point, I’d worked with Die Mannequin and another band called One Second 2 Late and I’d co-produced the Billy Talent second album with Gavin, but going into working with a guy like Brendan O’Brien, he’s the producer and he’s got the same guys that he’s been working with for years, so it was more of a take a step back situation and learn,” says D’Sa. “And it was great. I learned so much from the guy. He’s done some of my favourite albums of all time and it was amazing to be able to go in and see how he does things.” 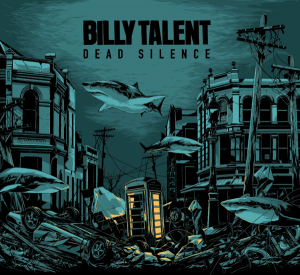 He says no one needed any convincing to let him produce a whole record for the band by himself.

“I think we all feel that we’ve earned this in a way,” says D’Sa.

“I’ve been in the band for 18 years so it’s a bit of a no-brainer after working with guys like Gavin and Brendan and learning so much about what they do that I was able to apply to this record.

“I was going to do the last one and we ended up working with Brendan and this record, we were like, ‘Why don’t we change it up?’ The guys were really excited about me doing it and I was too and when we talked to Pierre about it, he was totally cool with it and all over it. We never had anyone from the label say, ‘No, the guitar player can’t produce the record.’ It was a really great situation to be in. I mean, if that had happened on maybe the first record, I’m pretty sure someone would’ve stepped in and said, ‘I don’t know about that.’”

Between Billy Talent III and the start of Dead Silence, Billy Talent’s head of A&R switched positions at Warner Music Canada (he has since left the company) so D’Sa says the new album wasn’t A&Red.

“One of the big differences from the last record to this is the label has been really hands-off and let us do our thing, which is one of the best feelings in the world because you feel like you’ve earned it and they trust you and they know you’re not going to go and put out some random weird country record,” he laughs. “It’s been great. It’s been a really refreshing experience to not have people try to keep butting their heads in and giving their opinions on things.”

“A&R relationship with this band has always been not necessarily about the creative process, but more about what needs to be done once the music is recorded,” adds Tremblay.

The spring deadline wasn’t met not just due to creative decisions, but partly because after Solowoniuk had an operation in early February to replace a value in his heart.

“It was a pretty serious operation and it’s a long recovery,” says Tremblay. “Luckily, he had finished all his drum parts and he found out after that he needed the operation to happen sooner or later. So it delayed things a bit, but not too much. We were lucky in terms of the timing. Like I told him, ‘Recording this record broke your heart.’ [laughs].”

Says Kane: “It became apparent that they were making the record, we probably missed a deadline, but it was more important that the album be delivered with the full vision that the band had in tact and, in particular, the vision that Ian had for the record in tact, so we did have to make some on the fly changes and thinking about how we were going to introduce this record to the world and to their audience.”

While Solowoniuk recuperated for two months, the rest of Billy Talent finished up the album and Solowoniuk was as good as new — if not better — in time for summer festival season.

“As far as the international set up goes,” says Tremblay, “we did festivals in Europe and came back to North America at the end of June and did the odd festival in Canada in July, and Australia in early August to start setting up the record there, and then back to Europe [mid to late Aug.] for some key festivals like Reading, Leeds, all before the record comes out around September 11.

“I’m saying September 11 because that’s the North American release date, but in Germany it’s the Friday before that and other European territories it’s on the Monday.”

The band — booked by The Agency Group in every territory except America where it is APA — will be returning to Europe late Sept. to mid Oct. for a tour of Germany, plus a few dates in Switzerland and Austria, and 11 shows in the UK in November.

Management just sorted out the situation for the U.S. release, as Roadrunner, which released Billy Talent III, has since been absorbed into Warner Music Group and suffered office closures and layoffs. Atlantic released the first two Billy Talent albums. Last Gang Records was founded by lawyer Chris Taylor, whose firm Taylor Klein Oballa has represented Billy Talent since before it was signed.

Lindi Ortega Is A Cowgirl With A Vision →